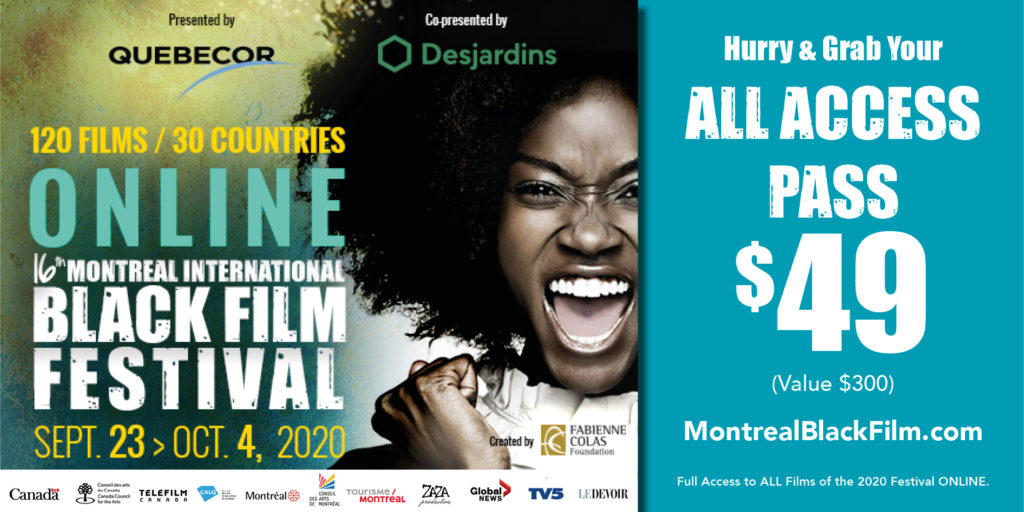 The 16th Montreal International Black Film Festival (MIBFF), created by the Fabienne Colas Foundation, will be presented by Quebecor in collaboration with Desjardins from September 23 to October 4, 2020.

Canada’s biggest Black Film Festival, the Montreal International Black Film Festival (MIBFF), has unveiled the programming for its 16th edition. The MIBFF returns for a meaningful 16th edition that promises to inspire through a strong, diverse, and bold programming, available entirely ONLINE across Canada and around the World, which highlights important topics such as the Environment, Immigration, Music, Human Rights, Women’s Rights, Systemic Racism, LGBTQ identity, and Black Lives Matter.

The Festival opened on Wednesday, September 23 at 7 PM with a Canadian film, Sergio Navarretta’s The Cuban starring Louis Gossett Jr. Then at 11 PM, 120 uncut films from 30 countries, will be available ONLINE until October 4. This year’s edition will close with Sonia Lowman’s Black Boys, produced by NFL New Orleans Saints’ safety Malcolm Jenkins. All-Access Passes – giving access to the whole film selection ONLINE – are available for purchase for a special price of $49 at the Festival’s website.

“The mission of the Montreal International Black Film Festival has always been to foster diversity off and on-screen while opening our eyes to Black realities through rich and daring films from around the globe. This historic 2020 Online edition highlights the tales and events that have challenged conventions, left a distinctive mark on our times and changed how we see the world. We feel privileged to be able to amplify the voices of more Black Filmmakers at such an important time in our history.” Said Fabienne Colas, President, and Founder of the MIBFF.

The Festival programming features a record of 120 films from 30 countries including Canada, Haiti, South Africa, USA, France, Colombia, Tunisia, Ethiopia, Brazil, UK, Martinique, Burkina Faso, Spain, Senegal, Italy, Kenya, and more. Our absolute favorites are inspiring stories that combine cultural heritage, the struggle against injustice, and inequality with passion, determination, strength, and great feats. Some of this year’s must-see films are: Back of the Moon, Binti, Lusala, The Cuban, The Last Tree, We are the Heat, Black Boys, Kenbe Fem, Mrs. F, T Gros, Land of Dry Bones & more!

MUST SEE PANELS AND EVENTS:

The MIBFF BLACK MARKET space dedicated to the cinema industry with some powerful & FREE panel discussions:
• Racebending in Film and Television: How do we Change and Overcome this Practice?
• Black Stories Matter: How to Get More Authentic Black Stories Produced on Film & TV?
• Show me the Money? How can Black Creators and Producers Access Funding Equitably?
• Black Women Behind the Lens: Overcoming Industry Obstacles and Getting their Films Produced.
• Meet the Filmmakers: Meet several Filmmakers of this year’s festival, in this interactive and informative panel.
Co-presented by Téléfilm Canada and Conseil des Arts et des Lettres du Québec.

The MIBFF IN THE NEIGHBORHOOD – presented by Desjardins – which this year will give youth FREE access to a movie discussion on September 25 at 7 PM at the Cultural and Community House in Montreal North. The evening will open with the short Mahalia Melts in The Rain by Carmine Pierre-Dufour and Emilie Mannering followed by the mid-length documentary Briser le Code by Nicolas Houde Sauvé. A Q&A discussion with Carmine Pierre-Dufour and Fabrice Vil – moderated by Nadège St-Philippe, will follow the screenings.

The MIBFF KIDS PROGRAM which will inspire children through the discovery of Black stories.

Also introducing this year, the PUBLIC’S CHOICE AWARD! Every MIBFF All-Access Pass holder will be given the opportunity to vote for their favorite films on the Festival’s online streaming platform in the following categories: Narrative Features, Feature Documentaries, Mid-Length Documentaries, Narrative Short Films, Documentary Short Films. Winners will be announced on Monday, October 5.

About the Montreal International Black Film Festival (MIBFF)
Created in 2005 by the Fabienne Colas Foundation, the Montreal International Black Film Festival (MIBFF) is currently the largest Canadian film festival entirely dedicated to black realities from all four corners of the world. It aims to offer the public the most spectacular productions in black cinema and debate the great cultural, social, and socio-economic issues facing society. The MIBFF goal is to promote the development of the independent film industry and showcase more films depicting black realities around the world. The festival seeks to prioritize local and international films that do not necessarily come under the spotlight, a new cinema that moves its audience and raises awareness – and a few eyebrows. In so doing, the MIBFF addresses issues and showcases art that makes you think and smile, provokes, bewilders, and shocks you – a new, fresh look at black cinema from all parts of the globe! www.montrealblackfilm.com