Anedie Azael was born on September 15, 1988. She is a professional model, student and activist who has been crowned Miss Haiti 2011.

Anedie was raised in Port-au-Prince, Haiti, by her parents, Eddy and Chantale Azael, then in 2004, at the age of 16, she moved to Miami, FL to pursue her studies. Despite the challenges her country faces today, she grew up having unyielding aspirations of posing for editorials and strutting down runways, unveiling unforgettable pieces created by the world’s most prominent designers. “I’ve discovered myself.” she confidently proclaims. Anedie graduated from Felix Varela Sr. High in 2006.

In 2009, Anedie’s dreams became a reality. She signed with Runways The Talent Group in Miami Beach and started booking jobs immediately. Her unique, exotic features and bubbly personality instantly caught the attention of casting scouts, photographers and stylists. Anedie is currently the face of Alpha Communication Network (ACN) in Haiti.

Aside from being a premier model in the industry and a student majoring in Business Management, Anedie has contributed to helping the children in her country, Haiti. Even before the devastating January 12, 2010 earthquake, Anedie and her mother helped impoverished kids in many ways, such as paying for their annual tuition, providing school supplies and moral support. In August 2010, Anedie founded her organization, Peace Love International, whose mission is to empower women and children. She is also the Head Coordinator for Word and Action organization whose focus is to protect sexually abused children. Their goal is to build a therapeutic center for children and women in Cap-Haitien, Haiti.

Anedie is a pacifist who desires to inspire young people to be optimistic,to better themselves mentally and physically; and to help one another. 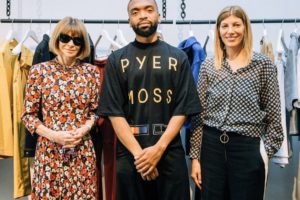 Join us Tonight at 7 PM EST on the "Clubhouse" App

Naomi Osaka knocked Serena Williams out of the Aus

Join us Thursday night at 7 PM EST on the "Clubhou

#TrendingNews: The @NYTimes report, the N.A.A.C.P.