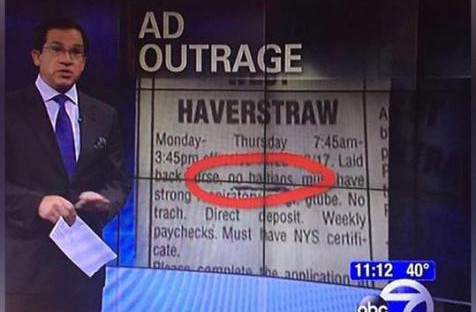 In October 2015,  L’union Suite and The Haitian American Facebook Page played a big part in assisting Haitian nurse Bethilde Dufrene  in getting national attention after a discriminatory classified advertisement was posted in a local New York  penny saver by Interim Healthcare which read “Laid back nurse, no haitians, must have strong respiratory mngt.”

Interim Healthcare is a Florida-based healthcare company whose online about us page says they are the nation’s largest providers of home care, healthcare staffing and hospice services and more than 300 locations in 43 states.

The incident which went viral in less than 24 hours  sparked outrage within the Diaspora in New York and South Florida. After national coverage, an apology by Pennysaver Chairman Sidney Sutter and Interim Healthcare’s Katherine Mcnally,  the “Road Trip Against Racism” rally and continued force by the Haitian Nurses Association, the New York State Attorney General’s office said Wednesday that Interim Healthcare agreed in a settlement to develop new anti-discriminatory policies and put safeguards in place to stop bigoted posts in the future.

According to Daily News,

Attorney General Eric Schneiderman investigated whether the bigoted message was illegal discrimination or a prank. His office found that the ad was pulled directly from a patient’s request and was not reviewed before being sent off to the Pennysaver.

The “No Haitians” ad was posted in violation of civil rights laws, he said.

The investigation concluded that Interim Healthcare did not have any precautions in place to weed out discriminatory requests from patients before posting them publicly.

“Blatantly discriminatory job advertisements like this are wrong and clearly illegal,” Schneiderman said. “My office is committed to ensuring equal access to employment for all New Yorkers and will not tolerate discrimination against any New Yorker based on race or national origin or any other protected status.”

The advertisement also specified the patient wanted “females only” for the job.

When the ad first appeared, Pennysaver Chairman Sidney Sutter apologized for its placement, and pulled it the next day.

The ad was “mistakenly published without proper editing protocol,” Sutter said. “By no means does it reflect the opinions or feelings of the company.” 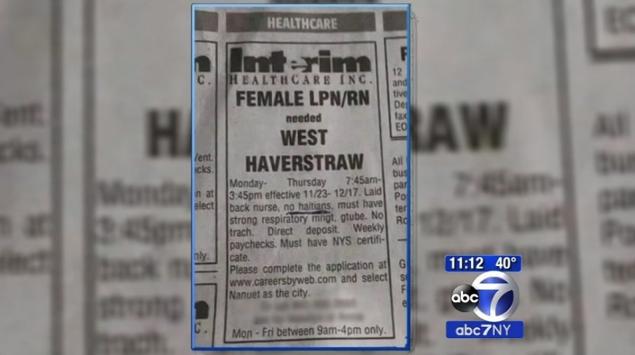