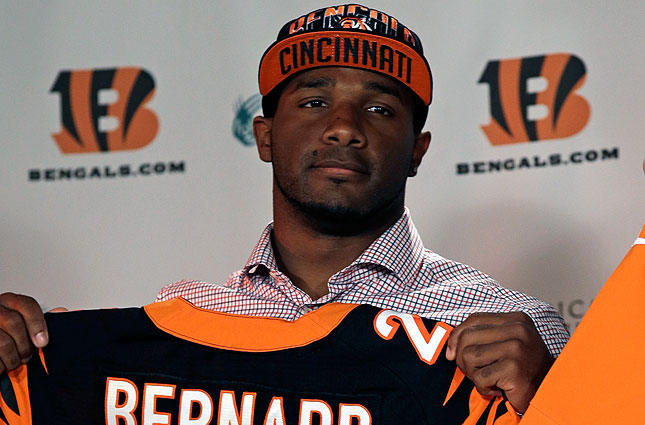 If you’re a Cincinnati Bengals or New England Patriots fan, you are prepping for Sunday night’s game between the two teams. I am a patriots fan, but tonight I am also rooting for Haitian American running back Giovanni Bernard and watching as he play against Patriots rookie running back James White, who became a brother after his family took him in when he was homeless.

When Bernard was 10 years old, he lost his mother to cancer, his father fell on hard times and eventually lost their house. With no where else to go, James White’s parents rescued Bernard off the streets and took him in.

It’s been about six years since the family of his best friend opened up their home to him. At that point, the high-school senior needed his friend, James White, more than ever. When Bernard was 10 years old, he lost his mother, Jossette, to thyroid cancer, but continued to live with his father, Yvens, at their Boca Raton home. But during Bernard’s senior year, his dad fell on hard times. After losing his dry-cleaning business, he eventually lost the house. Yvens couldn’t afford to pay rent. Their only option for shelter was a car.

That’s when White’s parents, Tyrone and Lisa, intervened. With their oldest son, Tyrone Jr., off to college at Central Florida, they had a spare room. They had a safe haven. And on that day, Giovani Bernard became a part of the family. He and James White were always close, but bonded even more through hard times.

“I consider [White] my brother. There was never a time that I didn’t consider him that,” Bernard said. “His family did so much for me. And my family understands the extent that [the White] family went through for us and for me. No matter how many times you say thank you or do this or do that for them, it doesn’t go up to the point to how much they helped me out. Their family means a lot to me.”

The two followed each other’s lead all throughout high school. On Sunday night, they’ll live out their NFL dreams together. Bernard Gillette Stadium as the Cincinnati Bengals’ star running back; White is a rookie looking to establish himself with the Patriots.

It means the world to both running backs that they’re not only in the NFL together, but that their teams will face off on Sunday. Bernard has high hopes for White. And after appearing in his first game last week, White said he’s motivated by his friend’s success.

Click Here to watch ESPN’s Gio Journey, the story of how Hall of Fame wide receiver Cris Carter helped Giovani Bernard on his path to the NFL.

Pictures of Bernard and White and two from Bernard’s instagram page.