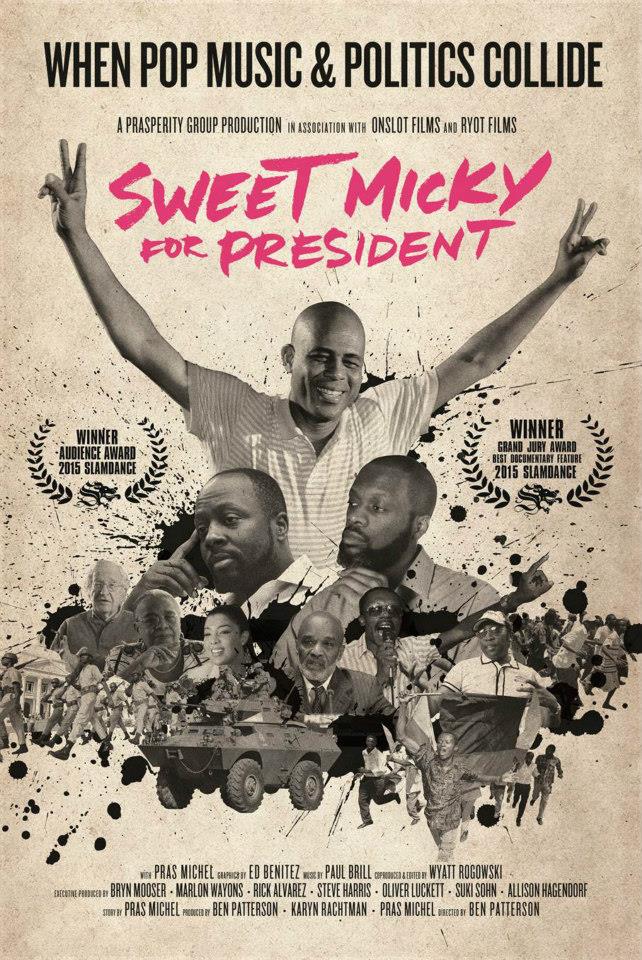 Could this film be coming to a theater near you?

As Haiti prepare for the departure of current President Michel Martelly, Martelly’s journey from artist to politician, “Sweet Micky For President” has been one of the most talked about projects the past year.

With the assistance of former Fugees member Pras, the film offers an up-close look at two musician-turned-politicians  Wyclef Jean and Sweet Micky as they fight it out to lead Haiti. Not only is ‘Sweet Micky’ leading the congregation at this years Film Festival, but Pras have been appearing in person at selected screenings of the film answering questions in relation to the work. 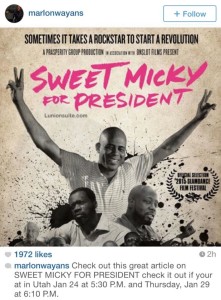 A couple of months ago many of us first heard about Pras Michel’s “Sweet Micky For President” when actor Marlon Wayans instagrammed a picture of the poster during the Sundance Film Festival in Utah. Since then, the documentary which has been one of the most talked about films in the  film festival circuit has won numerous awards, and Haitian-American Pras Michel is excited about to being able to share his film with the world and his Haitian community within the next few months.

The winner of the 2015 Slamdance Jury Award and Audience Award, Sweet Micky For President follows Pras Michel, Grammy award-winning rapper and founder of the hip-hop group The Fugees, as he returns to his homeland of Haiti post earthquake and finds a corrupt government in paralysis. With no experience or money, Pras passionately mobilizes a presidential campaign for the unlikeliest of candidates: Michel Martelly, aka “Sweet Micky”, Haiti’s most popular and most outlandish pop star.

The idealistic and politically inexperienced pair set out against a corrupt government, civil unrest, and a fixed election system to change the course of Haitian history. When Pras’  former bandmate  superstar Wyclef Jean  also enters the presidential race, their chances seem further doomed and the story takes on the wild twists of celebrity drama.  Pras Michel acts as masterful storyteller in SWEET MICKY FOR PRESIDENT and Director Ben Patterson  brilliantly captures an important part of Haiti’s history as a fledgling democracy struggling to produce a government worthy of the world’s first black republic.

Thinking what many of us thought when “Sweet Micky” also know as “Tet Kale” announced he was running for president,  in a recent spot light interview with  Beyond Cinema Magazine, Pras was asked why was Sweet Micky the guy he put his hard-earned money & media muscle behind for the presidency of Haiti? 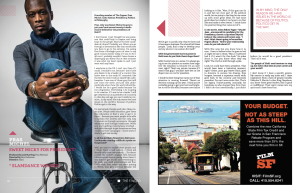 I don’t know. I just thought he was some-one that could help to inspire and bring hope to the people. Was he the best candi- date of choice? Probably not. When you go through a devastation like that sometimes you have to go to the extreme. I’m seeing that from a hindsight point of view. In my good consciousness, today, if I was to do it all over I probably wouldn’t have chosen a diaper guy, you know. But at that moment it was what my heart spoke to, and I just went with my heart.

I was born in the US. I can’t run. Even if I could, I wouldn’t run, because I don’t have any desire to be a leader of a country. You know how in the early BC centuries, like the 900, the 1300, I look at myself like a phi-losopher. I was one of those guy that will just roam the earth and just talk, philo-sophically, about how the world should be.I would not be a good leader because I’m too progressive. Everything I do is going to be creative. If I was to be a leader I will get creative, but as a president of a country in this day and age you can’t really be cre-ative… in my mind, the only reason we have issues in the world is because of politics. Politics get in the way. 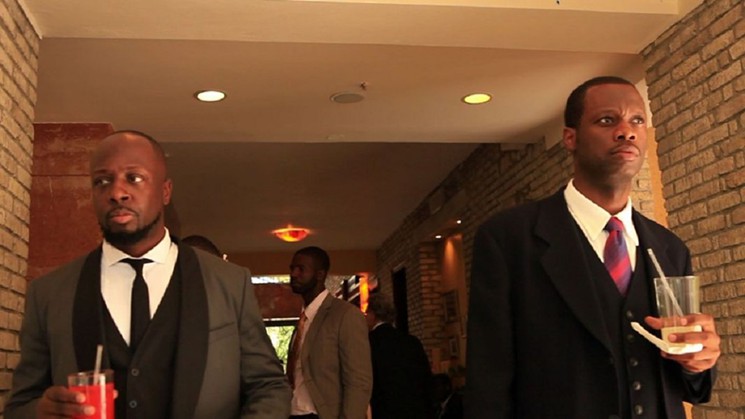 The article continues with questions which includes how his decision to endorse Michel Martelly affected his relationship with his former band mate and close friend Wyclef Jean.

In the movie, when fellow Fugee – Wyclef Jean – announced his candidacy for the Presidency, there’s a clip where Wyclef looks at the camera and he just says, “I don’t think there’s going to be another Fugees album.” How’s your relationship now, do you talk about it?

We’re fine now, but you know how it is, man. I have to believe when he goes to bed at night he has to think, “Man, I could have had it if it wasn’t for this dude.” He jokes about it, but you know what they say, right? The truth is told through a joke. Look, he could have been president. That would have been a historical moment, right? Artist, poor guy leaves Haiti, goes to America to pursue his dreams, flips burgers, become a superstar world wide, goes back to his country and becomes president. You can’t even write that. That’s his legacy. Unfortunately, ironically, his band-mate is who stopped him from that. I didn’t do that intentionally; I just didn’t believe he would be a good president. That’s all it was. – Continue Reading Here

“Fascinating and wildly entertaining.” – The Hollywood Reporter
“Artfully takes us through a roller coaster ride.” – Indiewire
“It’s an important film and one that acts as a time capsule for future generations.” – FilmPulse
“One of the most unlikely stories ever captured on film.” – Billboard

Check out Sweet Micky For President’s website for more information. We will keep you posted with more exclusive, release dates and information about the movie within the next few month.