MADRE partner Malya Villard-Appolon has been named a 2012 CNN Hero. Villard-Appolon is a co-founder and leader of KOFAVIV, an organization founded by and for rape survivors in Haiti. Their work has been especially vital since the devastating earthquake in 2010, when sexual assaults became rampant throughout the overcrowded and dangerous tent cities in Port-au-Prince.

“We are so proud to partner with Malya and support KOFAVIV’s work,” said Yifat Susskind, Executive Director of MADRE. “Malya and the women of KOFAVIV have persevered in the face of unimaginable obstacles to help Haitian women who have endured rape to rebuild their lives and their country. Their incredible dedication deserves every honor.”

Malya Villard-Appolon, has a story that many women cannot tell. She moved immediately to help personally during a crisis for women that came on the footsteps of the natural disaster that displaced 1.3 million people, killing 316,000 and injuring 300,000. The crisis for women wasn’t new, but the devastating loss of buildings and homes during the 2010 earthquake caused women to face a new vulnerability – a vulnerability that caused rape to rise markedly in the region, as thousands of women worked to survive in tent cities inside, and surrounding, the city of Port-au-Prince.

“Violence against women has always been an issue in Haiti and we’ve noticed that it has changed since the earthquake,” says Villard-Appolon outlining the root need for women as co-founder of the grassroots Haiti-based organization called KOFAVIV – Commission for Women Victims for Victims.

Starting in 2004 KOFAVIV began working with women who have suffered under poverty, abuse, sexual exploitation, under-privilege, violence and rape in the region. Their assistance came not per se as experts on global women and development, nor as only ‘good wishing’ bystanders, but as victims themselves of the ongoing violence against women that has plagued Haiti for centuries. The women of KOFAVIV have experienced the same type and intensity of violence that the women they were helping had experienced; and this was key to the organization’s impact from the beginning. This type of peer-to-peer advocacy works. It also worked to help bring attention to the need for change in the rape laws for Haiti. In 2005 KOFAVIV co-founders Malya Villard-Appolon and Jocie Philistin worked to bring attention to Haiti’s leaders with a first-time-ever law that sanctioned rape in the region.

In 2011 KOFAVIV, with international partners, also worked to bring reform to Haiti’s rape law, where inconsistencies in the application of the law caused slow progress with the sentencing of rape crimes. One of the largest roadblocks to the success of the law to prohibit rape has been due to the fact that it has not come to the region by decision of the parliament, but by executive signature of Haiti’s Interim Prime Minister, former United Nations official and lawyer Gérard Latortue.

Latortue became leader of Haiti for two years following the end of the political coup d’état in Haiti that ended in 2004. Without due legislative process Latortue worked to clean up corruption in the region, but the 2005 rape law was created with little to no ‘teeth’. The chance to bring justice to women who suffered under sexual crimes at the time was not improved. The 2005 rape law in Haiti could not ensure that arrests would be made, or that those who committed sexual assault in the region would be successfully prosecuted in court.

This legal trouble for women, who were already suffering under severe lack of protection living in tent cities following Haiti’s earthquake, provided fodder for advocates in 2011. Malya Villard-Appolon and her partners with KOFAVIV, including MADRE, the IJDH – Insti­tute for Jus­tice & Democ­racy in Haiti and Thomas Reuters Foundation Trustlaw, among others, pushed for a new improved law in Haiti that would give solid and ‘doable’ human rights protections for women against sexual violence and rape.

Villard-Appolon’s work not only focused on legislative reform; her on-the-ground efforts continue today through KOFAVIV. “In Haiti things are very difficult,” says Villard-Appolon giving an update on the situation for Haiti as the year 2012 comes to a close.

“We were all victims; I was a victim. I swore that I would give support and services to other women who were victims but also that I would work so that there would be no more victims,” said Malya as she outlined her past in a recent interview with WNN – Women News Network.

Rape has been widespread in the tent camps. Today crimes are still occurring at a regular pace as women and their families suffer under horrible conditions in makeshift camps surrounding Port-au-Prince. Often police and security teams arrive too late to apprehend a rapist. – SOurce 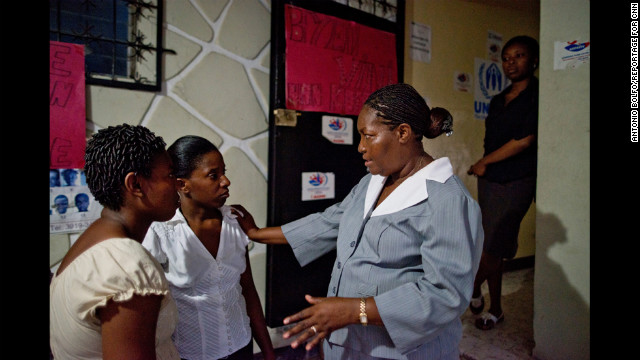