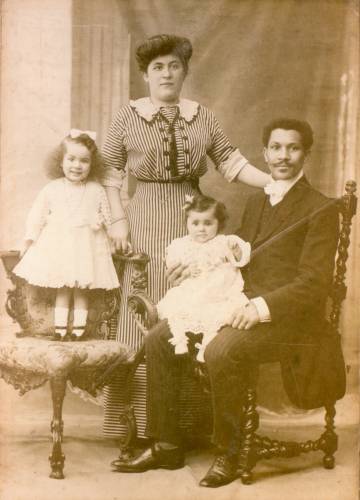 Joseph Philippe Lemercier Laroche, the only passenger of known African ancestry who died on the Titanic, was born on May 26, 1889, in Cap Haiten, Haiti. He was the son of a white French army captain and a Haitian woman who was a descendant of Jean-Jacques Dessalines, the first ruler of independent Haiti. Laroche’s uncle, Dessalines M. Cincinnatus, was president of Haiti from 1911 to 1912.

Joseph Laroche grew up among the privileged upper class in Haiti and received his early education from private tutors. Fluent in French and English, he decided on a career in engineering and at the age of 15 traveled to Beauvais, France with his teacher Monsignor Kersuzan, the Lord Bishop of Haiti, for his training. He attended classes in Beauvais and Lille, France, and received his certificate in engineering in 1907. 9 (Source)

After he graduated with an engineering degree, he married Frenchwoman Juliette Marie Louise Lafargue, the daughter of a widowed Paris wine merchant in 1908. They had two daughters, Simonne, born on February 19, 1909, and Marie Louise, on July 2, 1910. He was unable to find work matching his qualifications due to the color of his skin. Tired of living off of his wine seller father-in-law, he decided to return to Haiti with his growing family.

His uncle, Cincinnatus Leconte, the President of Haiti, arranged a job for him as a math teacher. His mother purchased first-class passage for them aboard the liner La France. When he and his wife learned of the Compagnie Générale Transatlantique’s policy against children dining with their parents, they exchanged their tickets for a second class passage aboard the Titanic.

On April 10, 1912, Laroche and his family boarded the Titanic from the harbor of Grande Rade near Fort de l’Quest. The Laroche’s enjoyed the opulent amenities of the ship, dining in the same dining room as its first-class passengers. However, they were subjected to stares and some insults from fellow passengers and crew who frowned upon their interracial marriage.

Shortly after the Titanic struck the iceberg at 11:40 p.m. on April 14, Joseph woke Juliette and told her that the ship had suffered an accident. He put all of their valuables in his pockets, and he and his wife carried each of their sleeping daughters to the ship’s deck. As the ship sank in the early morning of April 15, his last words to her were: “Here, take this, you are going to need it. I’ll get another boat. God be with you. I’ll see you in New York.” Laroche died in the sinking of the Titanic. His body was never recovered. (Source)

His wife returned to Paris with her daughters Louise and Simonne Laroche and gave birth to their son, Joseph Lemercier Laroche. It is not known for sure which lifeboat Juliette and her daughters escaped in, although Juliette remembered a countess being in her lifeboat. There was a countess on board the ship, Noël Leslie, Countess of Rothes, who escaped in lifeboat 8, so it is likely that Juliette, Simonne, and Louise all escaped the ship on this lifeboat.

Laroche, a three-act opera based on his life, was an official part of the 2003 National Black Arts Festival and was scheduled to premiere at the Callanwolde Fine Arts Center on July 18. Joseph’s daughter, Louise Laroche (2 July 1910 – 28 January 1998) was one of the last remaining survivors of the sinking of the RMS Titanic on April 15, 1912. It is believed that she, her sister, and her father, Joseph Philippe Lemercier Laroche, were the only people of African descent aboard. 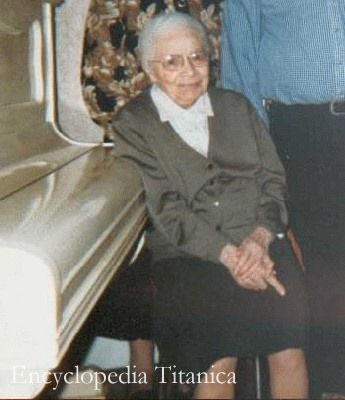 Titanic survivor Louise Laroche at age 87 in 1997, shortly before her death. Along with her sister and her mother, she survived the Titanic disaster of April 15, 1912, which took the life of her father, Joseph Phillipe Lemercier Laroche of Haiti, who is believed to have been the ship’s only Black passenger. Louise was almost two years old when she boarded the ill-fated ship. After being rescued and sent to New York aboard the Carpathia, Louise and her family returned to their native France, where they lived for the rest of their lives.

To Learn More About The Family, Click Here For A Gripping Article & Interview Of Louise Laroche and her family.