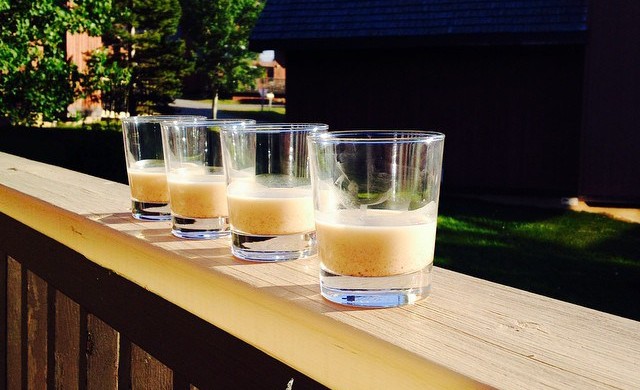 Aside from Soup Joumou, Cremas which are consumed year round is also a very important part of Haitian homes doing the holidays. I just ran out of my 2 bottles and shuffling to get some today before new years eve.  As much as I love Cremas, I doubt I would ever really want to make it but here are a few recipes if you are ever interested in making and keeping your own bottle of this classic Haitian deliciousness in your home.

Cremas, most popularly known to Haitian as “Kremas in Haitian Creole.” It is a sweet and creamy alcoholic beverage native to Haiti. The beverage’s recipes vary from person to person with a few differences in ingredients. However, the overall look and taste is similar. The beverage possesses a creamy consistency similar to a thick milkshake and varies from off-white to beige in color. The drink is often served at social events and during the holidays. It is usually consumed along with a sweet pastry or depends on your preferences. The drink is often served cold however it can be served at room temperature. The beverage has become recently marketed in the United States as well as in Europe.  – Source

This Large Up recipe is my favorite and from what I’m told one of the most accurate.

Also known as Cremasse or Kremas, Cremas is the very boozy Haitian answer to egg nog. A holiday staple, this rich, coconut-infused beverage strikes a balance between sweet and savory and—most importantly—packs a mighty punch. While it’s often made with rum, my grandmother, who immigrated from Les Cayes, Haiti in the early 1970s, insists on using high-proof grain alcohol —specifically Everclear—in her recipe. Growing up, I could always tell when she was making Cremas—one too many “I love you”s always gave away the high-alcohol content in each sip.

So this year, I took my wonderful grandmother’s instructions—which she delivered entirely from memory—and combined them with a healthy dose of my imagination to make my own Cremas. All I can say after a couple of sips is this: Cremas, I love you.

Combine granulated sugar, cinnamon sticks, and water in a saucepan and place on low heat. Allow sugar to fully dissolve, being careful not to brown. Once simple syrup forms, remove from heat, carefully pour into a large bowl, and cool.

Once syrup cools (you may notice some crystallization), whisk in Everclear (note: this grain alcohol is incredibly flammable, so prepare away from heat). When alcohol and syrup are fully combined, vigorously whisk in sweetened condensed milk in a steady stream (this will avoid the milk curdling). Repeat with evaporated milk and coconut cream. Add lime zest, vanilla and almond extracts, nutmeg, cinnamon, and salt. Set aside for 1-2 hours to allow flavors to meld. Strain through a fine mesh sieve and pour into glasses. Garnish with ground nutmeg and serve. Store any remaining cremas in glass bottles in a dark, cool place.