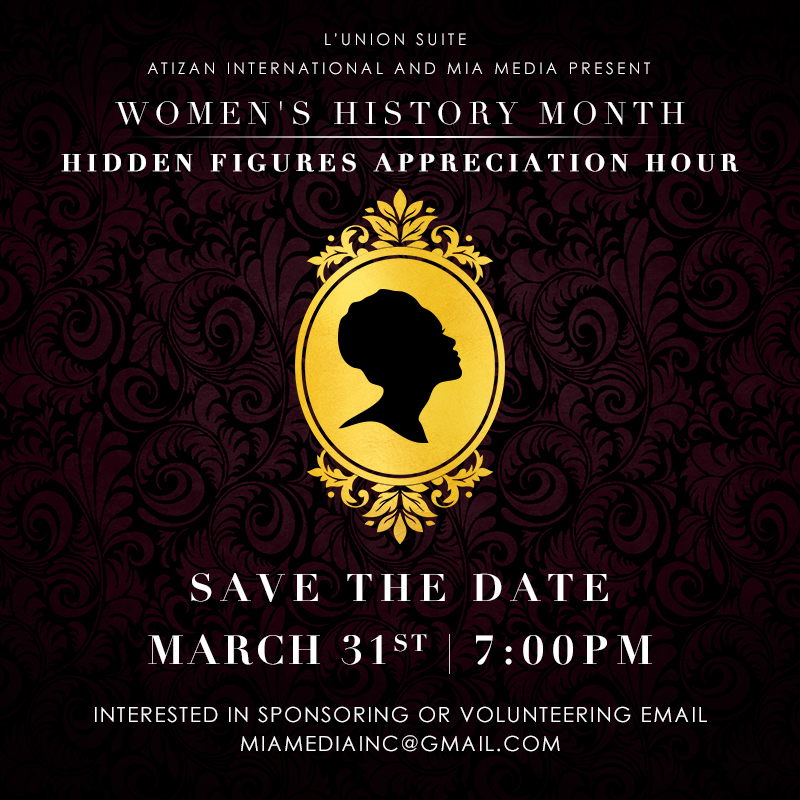 During the month of March, men and women revel at the achievements of women from around the world. Pioneers who have paved the way for others and women who have sacrificed to reach their highest aspirations.

In observance of Women’s Month, which is celebrated every year in March, L’Union Suite, Atizan International and M.I.A. Media, Inc., are putting their powers and resources together to bring the community – Hidden Figures Appreciation Hour.

Being a Hidden Figure is not solely about being behind the scenes making great things happen, but it is also about brilliance shining through with resilience. It is about the countless women who have created a world of greatness for other women to emulate and follow through perseverance and determination.
As young Haitian-American professionals, L’Union Suite, Atizan International and M.I.A. Media, Inc., believe that it is time to shed a positive light on the triumphs of Haitian-American women in and outside of the community who have each gained the right to be appreciated and acknowledged.

As Hidden Figures in our community the honorees’ contributions to our culture have been instrumental in changing the face of Haiti to the world. There are moments in life where it is vital to show individuals how very proud we are of their efforts to expose Haiti’s culture and heritage through their work on a professional and personal basis, and Hidden Figures Appreciation Hour will do just that. As a “Thank You,” this event will bring together great achievers in several spectrums including Literacy, Art & Entertainment, Sports, Media, Music, Politics and Television Entertainment.

On a philanthropic level, proceeds will go to help Princess in Training, an organization that focuses on empowering young girls and giving them the tools necessary to fulfill their dreams and further their future.
Scheduled for Friday, March 31, 2017, Hidden Figures Appreciation Hour will feature some of Haiti’s most genuine gems. From entertainers to community leaders, journalists and Olympic athletes, this will be a great event to shine a light on true role models.