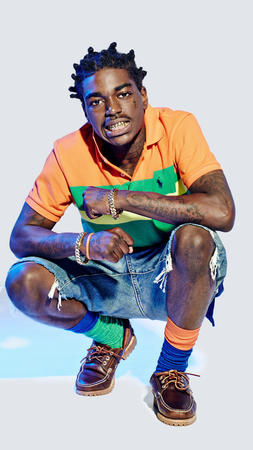 Update 8.17.16:  Bad News For Kodak Black Fans. Kodak was supposed to be released from jail today, but now that won’t be happening.  After news broke yesterday that Kodak Black would be released from jail, a new report says he is being held after two active warrants were discovered. The Sun Sentinel is reporting that during the process of being released from ‪Broward‬ main jail in downtown ‪Fort Lauderdale‬, police discovered a warrant for Kodak in St. Lucie County, ‪‎Florida‬ and another warrant out of Florence, South Carolina. It wasn’t clear why the warrants weren’t discovered before the release process.

The Sun Sentinel reports that rapper Kodak Black went before a Ft. Lauderdale judge today to fight two cases that could keep him behind bars for some time. 19-yr-old Black, whose real name is Dieuson Octave, changed his plea from not guilty to no contest in the two criminal cases that had put his music career on hold ( read here). The judge sentenced Black to one year of house arrest and five years of probation.

According to Brett Clarkson, a reporter for the South Florida Sun Sentinel, Kodak Black’s legal team entered a no contest plea to all charges that way the Florida rapper can tour internationally. Michael Kushner, executive vice president of legal at Atlantic Records, was in court to testify on behalf of Kodak, saying, “He’s only at the very beginning of a very promising career […] It is our hope that the court will agree that he be given the opportunity to turn his life around.” Another friend of Kodak told the judge, “I think he deserves a second chance.”

Judge Lisa Porter accepted Kodak’s plea telling the 19-year-old   “I will give you an opportunity, Mr Octave, to prove yourself here, and be a productive member of society” she then reminds him that if he makes a single mistake again, he’s looking at 55 years in prison. “What happens from here on out is up to you,” she warns.

He was sentenced to 12 months of house arrest in an undisclosed location about 50 minutes from where he grew up in South Florida, followed by five years of probation.

Kodak will also perform community service, anger management, and community control supervision. In addition, the judge withheld adjudication, meaning he won’t become a convicted felon and will be allowed to tour internationally.

The judge will allow Kodak Black to come home whenever the jail releases him which can be at any moment now. As Kodak exited the courtroom, his mother could be heard exclaiming, “I love you, baby boy!”

The Haitian rapper is notably one of the most popular artists this year, having built a sizable buzz through his independent releases, Black is  signed to Atlantic Records. His YouTube videos have garnered tens of millions of views, and in 2015, Canadian rapper Drake posted a video of himself dancing to a Kodak Black song, “Skrt.” Black also has collaborated with established hip-hop artists like French Montana and Gucci Mane, among others.