This annual beauty pageant, which began in 1991 as Reina Sudamericana (South American Queen), is based in Santa Cruz de la Sierra, Bolivia. Up to 2003 the participants were restricted to the 10 countries in South America; in 2004 participants from Panama and Costa Rica in Central America were invited; and in 2006 participants from Dominican Republic, Nicaragua, Puerto Rico & Spain joined.

In 2007 Mexico, Guatemala, Honduras & USA were added, and the name changed to Reina Hispanoamericana. The pageant is organized by Promociones Gloria, based in Bolivia. More than 15 contestants participate every year.

This year, 22 candidates competed in order to receive the title and crown from the hands of Evalina Van Putten from Curacao, Reina Hispanoamericana 2011.

Venezuela has the most number of crowns in this pageant, a total of six crowns followed by Brazil with five crowns. Last year, the very own representative of Curacao, Evalina van Putten honored the fresh new Caribbean country with the first international crown of the South American soil. Evalina van Putten is a beauty pageant titleholder who was crowned Miss Universe Curacao 2011 and represented her country in Miss Universe 2011 and afterwards won the Reina Hispanoamericana 2011.  Sarodj Bertin, 26, was elected as the Queen Hispanoamericana 2012, in the twenty second edition of the beauty contest held among 22 candidates in the Bolivian city of Santa Cruz.

As Reina HispanoAmericana she will be working for the children of her country. Sarodj Bertin was named GoodWill Ambassador of Haiti. This title has also been given to Angelina Jolie, Shakira, Bono, and other well-known personalities around the world, and also Sarodj.

She played the final spots with the Spanish Juliana Sampaio (Spain), 24, who came in second. Bertin, who previously won the title of “Best Silhouette” answered a question in the finals to the jury in response to a question about the difficulties of being a woman today brought her to the crown.Sarodj Bertín, Miss Haití Universe 2010. Being the first representative of Haiti after 22 years of absence, participating in the MISS UNIVERSE pageant the same year shortly after the earthquake that struck the island in 2010. Born on April 11 of 1986 at Port au Prince. Daughter of Jean Bertin and Mireille Durocher Bertin. 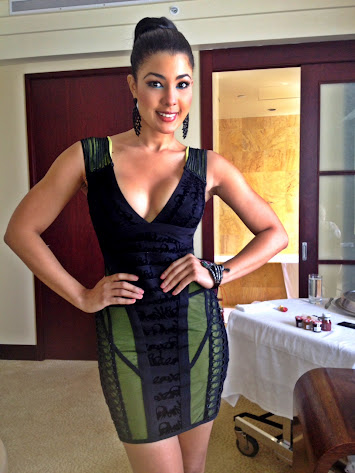