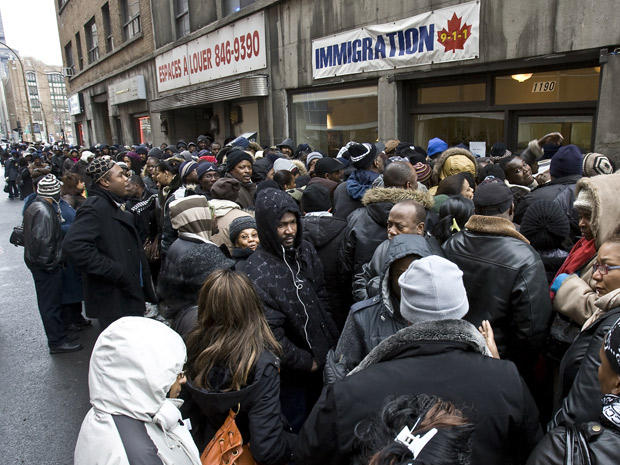 Some good news for our Haitian undocumented immigrants.

The City of Montreal unanimously approved a motion on Monday declaring itself a “sanctuary city” for undocumented immigrants.  The motion includes provisions to ensure undocumented people can obtain services without fear of deportation. Mayor Denis Coderre said the move is more than symbolic and will help protect and assist the most vulnerable without compromising security.

“This is a historic moment,” said Denis Coderre who aims to protect immigrants without legal status, adopted unanimously.  Different measures, particularly in the areas of housing, healthcare and education, will be put in place. “It’s not just a symbol and words, there are policies that will be attached to it,” promises Mayor Coderre.

The motion ​comes as the province is dealing with an increase in the number of asylum seekers crossing the border illegally from the United States. 452 illegal immigrants appeared during the month of January on the border between Quebec and the United States. “This is 315 more than last year,” said the former MP and federal minister, adding that this data forces Montreal to “redefine our policy of immigration and openness.”

Advocate groups like Solidarity Across Borders argue the city’s motion is “inadequate” without the implementation of more concrete measures to help unauthorized immigrants in a safe way.

“The City of Montreal needs to get beyond easy symbolism and undertake tangible measures…to end deportations and ensure access without fear by undocumented migrants to all essential services including healthcare, education and housing,” said Stacey Gomez, a community organizer with Solidarity Across Borders. The organization had been campaigning since 2009 to declare Montreal a sanctuary city, demanding free access to primary and secondary schools, as well as hospitals, clinics and other services.

Coderre initially referred to Montreal as a “sanctuary city” while tweeting a response to President Donald Trump’s travel ban.

Message to Donald @POTUS Trump. Montreal proud "Sanctuary City"Newcomers & refugees are welcome.Diversity is our strength and part of ourDNA

What is a sanctuary city?

Sanctuary cities ensure undocumented people and unauthorized immigrants have access to city services, regardless of status and are not prosecuted for violating federal immigration laws. Toronto was the first city in Canada to be declared a sanctuary city, with city council voting 37–three on Feb. 22, 2013.

Hamilton, Ont. was the second in February 2014 after city council voted unanimously to allow undocumented immigrants access city-funded services such as shelters, housing and food banks.

There are believed to be at least 50,000 undocumented migrants in Montreal.