According To Brooklyn Street Art:

Parisian Street Artist C215 has been traveling again, this time to Port Au Prince in Haiti, where he drew many curious audiences during the week-long visit to watch him create his evocative stencil portraits on columns, in doorways, along narrow walkways, on rooftops, and in streets.

“It was a very strong experience for me personally. I found it to be kind of a mix between the favelas of São Paulo and the suburbs of Dakar,” says the artist known for casting a light on homeless or otherwise disadvantaged citizens in cities around the world with his very personal stencil portraits.

While in Haiti meeting new people and learning as much as he could about the culture on the streets, he also was learning about a small new urban art organization that has goals of one day throwing their own festival with invited international artists. “Aude Hulot of the Kasav organization is guiding me in this anarchic city,” he reports as he carries bags full of aerosol paint through a back alley. Only a few years ago C215 made his name in the Street Art world with one or two colors, white and black. Often he did his work using only white. With some sort of empathy at hand, he developed an uncanny ability to convey part of the essence of the people he depicted simply through a quickly sprayed stencil on a doorway, or on a dumpster. That sort of honesty in depiction, not shrouded by edifice, made his spare figures almost jump from the mottled and rusted surfaces they appeared on. Since he first began there have been many who have observed that his work inspired a number of new Street Artist – each trying their hand at cutting and spraying portraits. It’s not a bad legacy to tell the truth, but you can sometimes guess that the imitation isn’t always interpreted as flattery. 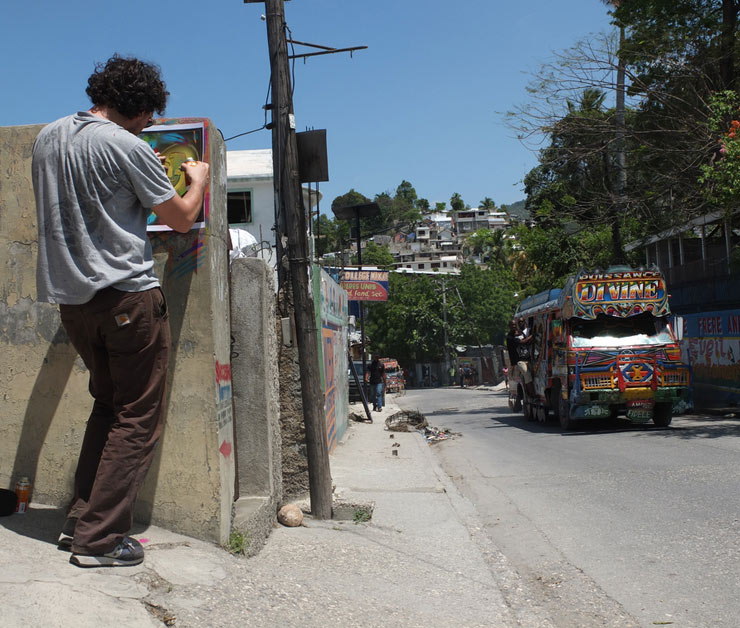 Brooklyn Street Art: How has your experience been in Haiti and what brought you here?

C215: A young woman living in Haiti, Aude Hulot, came to visit me in my studio one day in Paris and during her visit she asked me to come to Haiti to paint portraits in the streets of Port au Prince. She said she was part of a local arts association, Kasav and their goal is to promote urban art in the city – perhaps eventually to create a festival that attracts street artists to their city. I was interested in experiencing and learning about the dramatic living situation of people in Port au Prince, and to see what has happened in the three years since the earthquake. Because I did not know if I would find a potentially dangerous environment or not, my good friend Viktor Gjengaar from Norway came along – he also helped to document the trip properly with photos and video.

Brooklyn Street Art: You had an audience for many of these pieces while you were putting them up. Is it difficult to do the work while people are watching and joking and conferring and talking?

C215: I painted more than fifteen pieces in seven days and every piece took me approximately 30 or 40 minutes to complete. Every time a little crowd gathered to watch what I was painting and I tried to stay focused on my job. When finished, I would speak with one of the people watching so that the others could get an explanation regarding my activity.Luckily for me Aude Hulot from Kasav always helped to explain to people in their own languages what was the meaning of my work in Port au Prince. I encourage artists who are interested in going to paint there to contact the Kasav association and I am sure they will find them to be a very great help. (http://www.facebook.com/ArtStreetVizyon). 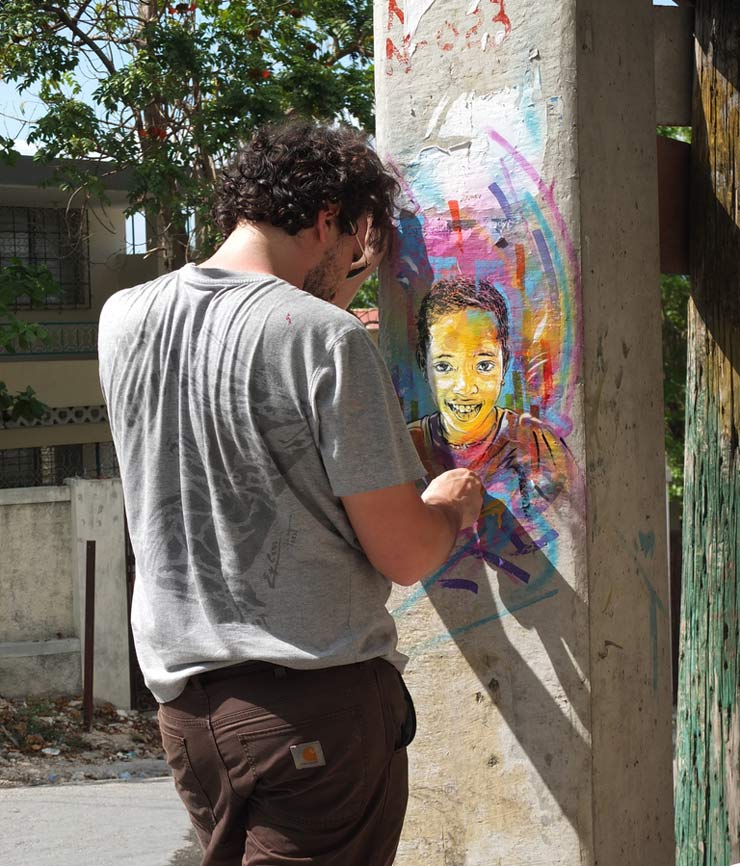