The Internal Causes
The internal causes are directly linked to the country’s heritage of political maladroit, political charlatans and demons, bad governance, and the people’s untamed anger and disastrous ideologies. You can’t build (Haiti was never built before. So we cannot speak of “Haiti’s reconstruction”) a country when you continue to destroy the little that you already have in place. For example, what would any people in their right mind continue to destroy public schools and other public and private institutions that provide public services to the masses, and which were created to respond to their everyday needs. The Haitian people MUST respect people’s businesses or property, and say NO to violence. What would the Haitian people burn someone’s vehicle or home when the owner has no political affiliation or contributes to the deadly living condition of the masses?

As a people and nation, for years, we have cultivated a collective mentality to destroy not to build, to deform not to reform, to regress not to progress. This collective attitude is certainly not the most effective strategy to foster social change and the collective emancipation of the Haitian people. It is certainly not contributing to Haiti’s development nor is it leading to human flourishing and human solidarity in Haiti.

As a people and nation, instead of destroying property, public institutions, people’s homes, and eventually people’s lives, we should think about other liberative alternatives and human-flourishing methods that will contribute to the (re-) construction of this country, protect what’s already in place, and preserve life. We should come together and think together so we could find ways to improve Haiti’s’ mass illiteracy, food crisis, security problem, and political and civil societies dilemma.

The External Causes
It is not breaking news in the twenty-first century to affirm that Haiti and the Haitian people have been subject to years of American damaging cultural and political imperialism, and destructive interventions by Western countries. It is certainly not breaking news in the twenty-first century that Haitian politics and the electoral process have always been under the radar of the international community (i.e. United States, Canada, France, Germany, etc.).

These countries have no respect for the general will of the Haitian people and are relentlessly demeaning the freedom, sovereignty, and democratic ideals and values of Haiti and the Haitian people. Interestingly, they claim to be the protagonists of these very principles they deny to other countries and peoples.

While the creation of the Haitian nation-state and the independence and freedom of the Haitian people, who were once enslaved by Western powers, the continuous existence of Haiti as a nation is seen by many political allies in the West as a challenge to the unholy trinity of the modern world: slavery, white supremacy, and racism. The country of Haiti is a symbolic reminder to many that it is possible to eradicate these three existential demons in the world today.

b) To the Haitian People
1. The Haitian people need to work collaboratively to develop new emancipative narratives for the betterment of Haiti, the enhancement of Haitian life, and to the value of those who yet to be born.
2. Building a holistic and effective democratic system in Haiti and functioning Haitian civil society is the responsibility of every Haitian citizen.
3. Haitian solidarity means serving one another and the opportunity to uplift your Haitian brother or sister in moments of crisis.
4. Haitian patriotic love means the total rejection of the “Kraze brize” and “koupe tet boule kay” mentality and the total renouncement of the ideology of the destruction of the country’s public institutions, and the private facilities that provide services to the Haitian people. We must say NO to political violence and all kinds of human-orchestrated violence and oppression in the twenty-first century Haitian society.
5. Respect for someone’s property or business is another way to express Haitian patriotic love and human solidarity.
6. The Haitian people must reject the ruse of charlatan politicians whose aim is not the best interest of the Haitian masses but the preservation of their political power and the control of the people.
7. The Haitian people must also reject the ruse and false promises of imperial powers that come only to steal, exploit, and destroy. They are not our friend; they are our enemy.
8. The Haitian people need to support humanitarian causes whose aim is not exploit the Haitian people or their resources but to make constructive contributions to Haiti’s development and enhance the human condition in the country.
9. The Haitian people must say NO to the Haitian bourgeoisie capitalists and the elite-minority, who collaborate with the imperialists and support economic capitalism, who have no interest in improving the living condition of the Haitian people.
10. The Haitian people must work together, support one another, and serve sacrificially, and give unconditionally to improve people’s lives in Haiti.

Conclusion
The Haitian bourgeoisie and elite-minority in Haiti and those with resources and skills in the Haitian Diaspora must invest in Haiti by working together. They should also work together to create new job opportunities and small businesses, and boost Haiti’s agricultural resources and productions. Secondly, Haitians of all social classes and those with economic resources ought to collaborate and find meaningful ways to effectively use their talents and skills to change Haiti’s education system and improve existing schools and create effective learning centers and universities that will foster hope, social transformation, and engender a new society in the Caribbean nation.

Haiti’s political and civil societies, in their current state, are not contributing to human flourishing and improving lives in Haiti. Thirdly, a genuine collaborative partnership between Haitians in the Diaspora and those with financial and intellectual resources in Haiti are desperately needed in the formation of a new class of Haitian entrepreneurs, leaders, professionals, educators in the Haitian society. Such a partnership will also help alleviate poverty, prostitution, and reduce child pregnancy in the country. Invest in Haiti’s education is to invest in Haiti’s future and to create a new optimistic life for the younger and future generations of Haitians. Collaboratively, we will improve the overall living and spiritual conditions of the people of Haiti.

Finally, to vote for the best candidate who will work for the people, walk in solidarity with the Haitian passes and the poor, and represent their best interest in the political arena, should not be taken for granted. Haiti as a sovereign and independent nation-state is entitled to have free and democratic elections, and the Haitian people have the right to voice their concerns, and discontent because they know what is best for them and certainly affirm what is best for Haiti. Let the will of the Haitian people triumph!
The future of Haiti is the hands of the Haitian people, and not foreigners or Western imperialists. Our salvation is not coming from an external power; it is coming from us. Our redemption is not coming from above but from below. We have the solution to Haiti’s problems. We are Haiti!

Celucien L. Joseph, PhD (University of Texas at Dallas) is an Associate Professor of English at Indian River State College. His most recent book includes “Approaches to Teaching the Works of Edwidge Danticat (Routledge, 2020). 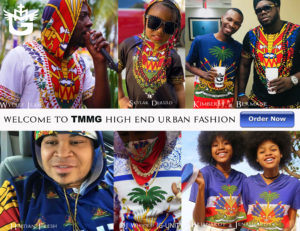 According to @ESPN, Former New England #Patriots a

Surprise someone back home with this awesome bonus