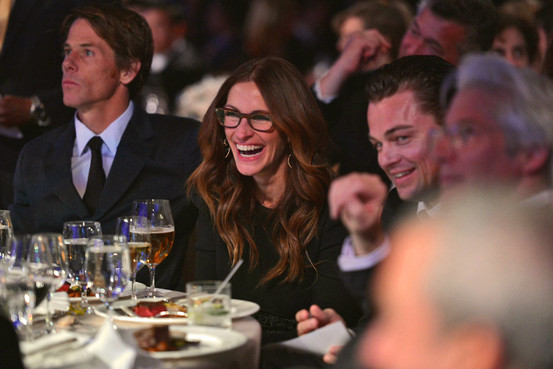 It was a veritable who’s who of Hollywood, complete with a live auction that supplied enough drama to win its own Golden Globe! The event, hosted by CNN’s Anderson Cooper (who has been one of the world’s leading journalists in bringing attention to Haiti), took place 3 years from the day that the 7.0 magnitude earthquake devastated the already impoverished nation. Cooper and Penn struck both a serious yet playful tone, as Hollywood opened its pocketbook to help the important cause. The event concluded with a special 4-song performance from Eddie Vedder, with Samantha Ronson DJ’ing the after party.

Following the sit down dinner, Penn took to the stage to deliver an impassioned speech to the crowd about why support to Haiti remains such a cause so important to his heart. He acknowledged several important folks who had made a huge difference in supporting JP/HRO over the years, including quite a few folks who were present for the night such as Lourd, Anderson Cooper, Soleil Moon Frye, Pam Anderson and former Senator Christopher Dodd of Connecticut. He gave especially high praise to the U.S. State Department (especially Hillary Clinton) and the U.S. military, for their work in helping to make a difference in Haiti.

Anderson Cooper later brought the comic relief for the night. After Penn swore incessantly during his speech, the CNN anchor took to the stage after to say, “I didn’t know we were allowed to say ‘F—k,’” sending the crowd into an uproar of laughter. “I would have said ‘F—k’ so much more.” He then poked fun at the “Mystic River” actor’s propensity for using colorful language.The real fun took place during the live auction, which raised over $2 million for the cause.

Penn announced that an anonymous donor who wasn’t present called him during the auction to donate another $1 million. The auction started off with DiCaprio bidding against another woman for the chance to spend a day with President Bill Clinton. They both ended up winning the item, paying $200,000 each. But the unknown woman was the real winner – she now gets to spend the day with Clinton and DiCaprio! For the second auction item, DiCaprio was bidding again, this time on a tour of Bhutan, but this time the “Django Unchained” actor was outbid! After he was done bidding, Leo took a break, giving a huge hug to Bradley Cooper as he was walking out of the room.

The next item saw Diller bidding against Lourd for a set of Haitian art work, which eventually went to Diller for $90,000. The fourth lot for auction was a trip to Italy for Fashion Week to hang backstage at the Armani show with elusive head designer Giorgio Armani. Witherspoon got in a bidding war with Huvane. When the two were each at $125,000 in their bidding, Huvane shouted out, “We’ll each pay $125,000 and we’ll go together.” They both won!

The fun concluded with a “Rock n’ Roll” package that was highlighted by the chance to hang backstage with Bruce Springsteen. Eva Longoria was running around the room trying to get the bidders to one up each other. The package eventually went to funnyman Spade who joked that he was raising his hand, “just trying to figure out whether or not my show is cancelled.” He ended up paying double for two versions of the prize package.

Vedder than took the stage for his performance, and recalled a story about how he was on a surfing trip with Penn and noticed that his actor friend’s arms looked particularly ripped. “Then I realized he was so big from removing all of that rubble (in Haiti),” the Pearl Jam lead singer joked. Vedder began his set solo on a mandolin and ended with a performance of his cover of Springsteen’s “My City of Ruins.”

As the crowd spilled out, Ronson spun her tunes as the crowd mingled. At the end of the night, Longoria hopped in a car to head off with Griffith while Roberts (looking ravishing while paring her dress with a JP/HRO baseball cap) & Moder waited patiently for their silver Prius to be delivered by valet. 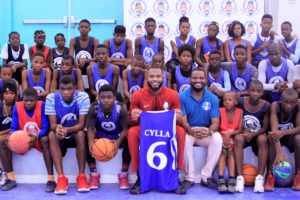 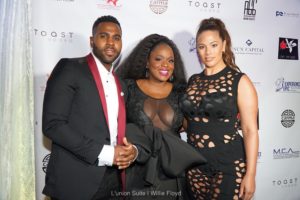