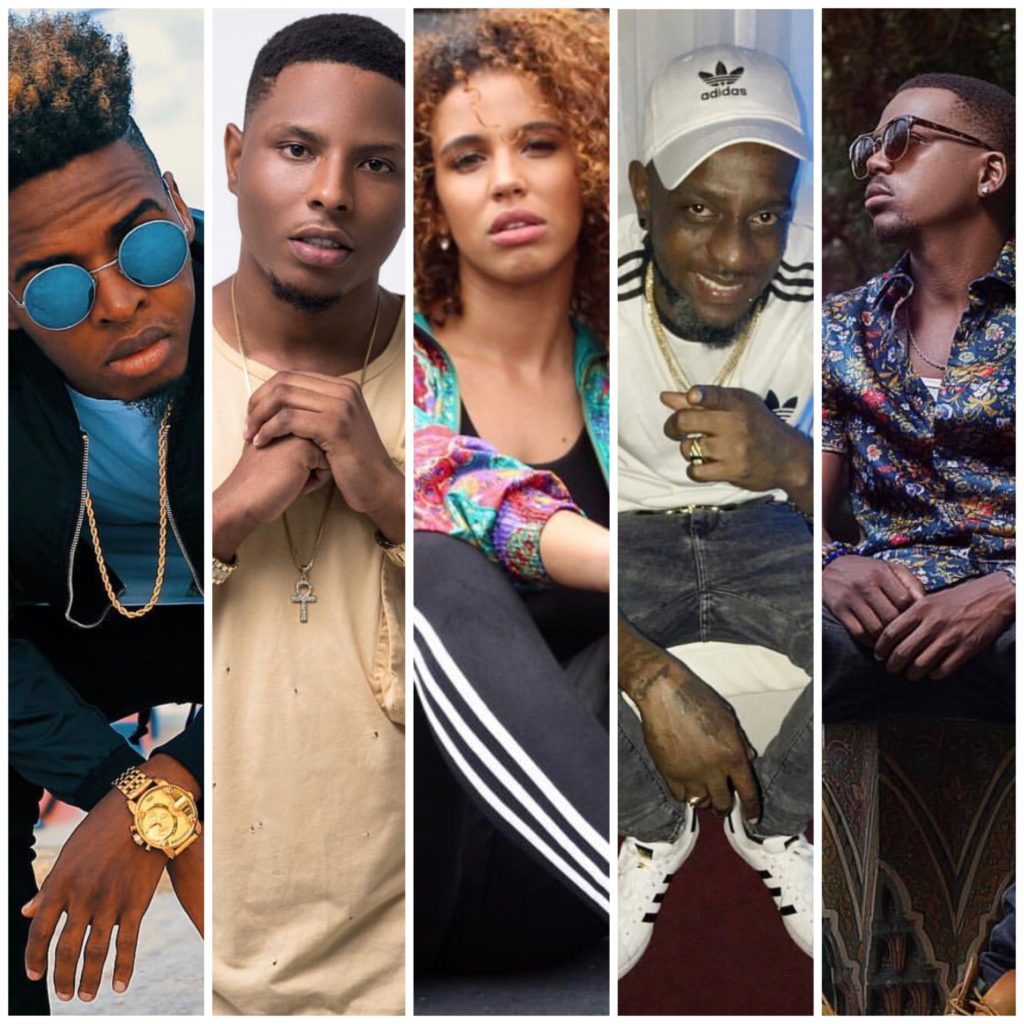 We’ve been increasing the number of Haitian artists on our daily playlist lately and we want to keep sharing our list with you as it grows. If you are new to the Rap-Kreyol scene like we are, here are a few things you should know about the genre.

Rap Kreyol also refer to as ‘Ipap Kreyòl’ is simply Haitian Hip Hop or Hip Hop Kreyol. The music originates from Haiti and is performed by artists of Haitian descent. Just like American Hip-Hop, many Haitian rap artists have had rough childhoods and difficult living conditions producing rappers who address socio-economic topics in their lyrics, often hardcore beats are used and the artist raps primarily in Kreyòl.

The genre has been part of the Haitian culture since the early ’80s with groups such as Original Rap Staff, King Posee, Rap Kreyòl S.A., Masters of Haiti, Fighters, Blackdo, Fam-Squad, Supa Deno, Prince Berlin, and Muzion attaining prominence, but lately, it has become very popular with Haitian youth. Throughout the years, groups like  Barikad Crew, Rockfam, Brimad, Topson, Chale Republic, Pick Up Click, BriganDie, Team Lobey, Dezod Beats and many others kept the genre buzzing.

We can’t mention Hip-Hop in Haiti without mentioning the godfather, late Master Dji.  He not only released the first Haitian rap song in the early 1980s but he formed the group Rap Kreyòl S.A. He was also the first Haitian DJ and also influential in encouraging other young Haitians such as Supa Deno, DJ Fanfan, and DJ Live to become rappers, DJs, and breakdancers.

Now that you’re all caught up on why this is a piece of our Haitian music culture you should know, continue researching and support if you are a hip-hop head, here is our first list of some of the hottest Rap-Kreyol artists you should know and add to your current playlist in 2017. We’re actually big Hip-hop fans and excited about this journey.

Think we missed anyone, or want to introduce more artists to us, email, or comment on your favorite Haitian artist for our upcoming features. Subscribe to the site to keep up with all of our upcoming lists.

Wendyyy, real name Wendy Divers is the self-proclaimed King of Creole rap is one of the most talented MCs in the rap game. For the past couple of years, he has created an undeniable buzz for himself with his mixtapes, freestyles, and features. His self-proclaimed “King” has caused major controversies in the Creole Hip-hop community and has gotten him the attention of many of Creole Hip-hop’s well-known artists.

The MC recently released his highly anticipated first solo album “Majesté” in 2013 at Privilege Hotel in Port Au Prince where hundreds of his fans showed up to purchase their copies.

Roody Petuband-artistel aka Roody Roodboy was born in Port-au-Prince. He grew up in Cité Militaire, a boiling area of the Port-au-Prince International Airport. His uncle, Mario Dauphin introduced him to the guitar in 2005, the day after the tragic death of his beloved father. This multifaceted instrument became immediately his workhorse and a source of consolation, facing the distress of the unexpected departure of the father. In 2008, Roody was among the top 10 finalists in the “Digicel Stars” music competition. Two years later he was the third finalist of the same competition which escalated his career.

Together with Steve and Herby Azor, Roody Roodboy launched “Mizik Malè m” at “Brothers dread production”. And, to reach the highest peaks, roodboy released “Pa Dekouraje”, his first solo music subject to the appreciation and enjoyment of the general public.

Niska Pascal Garoute better known by her stage name Niska, is a Haitian/American Artist, Rapper, and Singer-Songwriter.  Niska was born to parents, Tania Chihimie and Pascal Garoute. Niska was raised in Port-au-Prince, Haiti where she attended both primary and secondary school. Due to political chaos, and ongoing riots in Port-au-Prince (under Aristides presidency), Niska’s mother moved her and her siblings to Florida to finish school. Niska attended Cypress Bay Highschool in Weston, Florida for two years before transferring to the American Heritage School of Arts to play basketball and further her Artistic Career. After graduation, Niska went on to study in New York City where she began to pursue her long time dream of becoming an MC.

In 2014, Niska announces her forthcoming monthly music series, #GetItOnthe15th. Fans can expect a new original or remix record via Audiomack the 15th of every month leading up to the release of Niska’s next full-length project.

Jean Léonard Almighty, better known by his alias IZOLAN was born in Arcahaie in Haiti. He is a rapper and a well-known lyricist. He is well known for his rap Barikad Crew. He also has a blazing solo career which includes the release of 3 albums Fèmen bouch yo, K-tafal, Kite IZO baw love.

Izolan is also a businessman with his company (dlo izo) and his recording studio (Oye Oye Records). He splits his time between recording studios, performances here or abroad, and his family. He has collaborated extensively with other artists in the Haitian music scene and is also a recurring figure in small screen and radio advertising.

Jolissaint Lord Wensky aka TroubleBoy Hitmaker says his name came from his attitude, the way he carries himself. Trouble is from Cap-Haitien and started creating music in grade school but started taking it seriously when he moved to Petion-Ville. He made his music debut at the age of 12 performing Lil Bow Wow who was his idol at that time, and in 2010 he added the hitmaker to his name and started recording his own music, “Crank that moto” which, as its name suggests, is inspired by the unforgettable Crank that of Soulja Boy. Faithful to his pseudonym, Trouble Boy says he is determined to disturb the world of rap.

Baptista Lugendy St-Hubert, best known on the rap Kreyol scene as Baky Popile. Baky started recording music after one of his friends was killed in the Dominican Republic. The name of the song “Paskem se Ayisyen” (Because I am Haitian), one of 2012 biggest Rap Kreyol hits.

It was the 1st song he ever recorded and he wanted to use the song to start a revolution to discuss some of the unfortunate realities of people living in Haiti. Following the popularity of the song, Baky was signed to RKM recordz where he released 1 album and 3 mixtapes.

Daniel Darinus aka Fantom is one of the members of the very popular rap group Barikad Crew, one of the most popular hip-hop groups in Haiti.  At 13, he wanted to try his hands at dance hall music. Later, he will be noticed in D-camp and SOS before signing up for Pick-up click and Barikad Crew (BC). In 2009, after two albums with Barikad Crew, and one with Pick up click, he started working on his personal project:  Men nonm lan, an album from where he exhibited all his potential as a rapper.

Fantom has his own studio, Tapaje Recordz which serves as a recording studio for a local artists. On 17 February 2015, Fantom came into contact with a high-voltage power line during a Kanaval parade and was electrocuted. At least 18 people were killed and 78 injured when they were caught in the ensuing stampede.

Barikad Crew is from Rue Nicolas in Port-au-Prince and was founded in 2002 by Papa K-tafalk, Deja-Voo and Kondagana. Their primary focus was to produce music that reflects the lifestyle of the slums. The trio invited several other rappers from other underground groups to join. Their first single was a carnival song “Projè Project” released in 2003. In the beginning of 2004, Barikad Crew released “Bay Hip hop Bourad” together with a video filmed in their neighborhood park. Their second single, “Kijan’l Te Ye”, was released in January 2005.

The group rose to fame at the end of 2005 when they won 3rd place at the popular TV’s Christmas songs contest, “Konkou Chante Nwel”, on Telemax with the song “Nwel Pa’m”. At the beginning of 2006, Barikad Crew released their carnival hit song, called “Trip N’ap Trip”. Their debut album is called Goumen Pou Saw Kwè, and was released in November 2007. At the time of the album release, the group’s members were: Bricks, Brital, Dade, Deja-voo, Fantom, Izolan, Kondagana, Marco, Master Sun, Papa K-tafalk, and Young Cliff.

On 15 June 2008, three members of the group (K-tafalk, Deja-Voo, Dade) died in a car accident while they were on their way to a concert in Haiti.Less than two years later, another member, Young Cliff, died in the January 2010 earthquake.

Enide Edouarin, better known as Princess Eud, is often hailed as Haiti’s reigning queen of hip-hop.  The singer/rapper/clothing designer was born in Petion-Ville, Haiti on April 25th. Rapping in Haiti is done mostly by men, so to be a female rapper, she describes herself as being a yon fanm solid—a strong woman who wants to make a difference in my community and show all women that if you want something, you can get it. Eud was introduced to the public as a member of the group Tribu de Job, and can be heard on their album “Zokot Filozofi”.

After taking a break from music, she came back in 2007 focusing on a solo career. She released a couple of singles the following year and worked on other artists’ projects as well. In the summer of 2009, it was announced that Eud became the fourth member of Mystik 703 after years of working and touring with the group. Edouarin’s goal to inspire women is evident in her music. The singer and rapper believe artists are “messengers,” and it’s her mission to share inspiring messages in an effort to provide hope and heal emotional wounds.