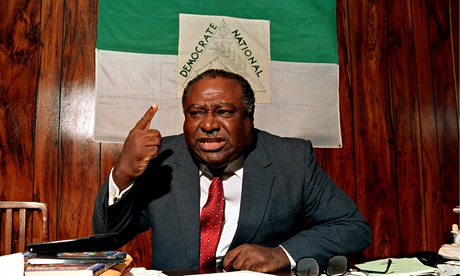 Leslie Manigat, who has died aged 83, was Haiti’s first modern-minded president. He tried to break the vicious circle of class-based violence and dictatorship that had held Haiti prisoner for nearly two centuries, but instead was broken by it himself. – source 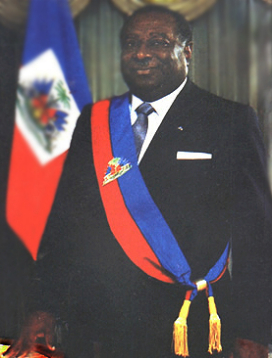 Former Haitian President Leslie Manigat, who took power in a controversial military-organized 1988 presidential election only to be ousted 4 ½ months later, would regularly ask visitors to his modest Port-au-Prince home, “Do Haitians really want change? Is Haiti prepared for change?”

It is a question that Manigat also quietly posed to himself as an author, historian and one of
Haiti’s most prolific intellectuals and political scientists who helped mold foreign diplomats from Europe to the Caribbean to Latin America.

Manigat died Friday after a long illness, including a weeklong bout with chikungunya, a mosquito-borne virus ravaging Haiti and the Caribbean, a representative of the family said. He was 83. “He loved Haiti, and he always wanted Haiti to arrive on the route of progress, development and tolerance in politics,” said former Haitian Prime Minister Gérard Latortue, a friend of more than 60
years who had served as his foreign minister in the short-lived Manigat cabinet.

“This is a man who believed a lot in democracy even if he knew that democracy couldn’t function well in a country where there is a lot of illegality, poverty and ignorance,” Latortue said. “He believed in the intrinsic value of the individual, and he believed in the existence of political parties.”

Former first lady and presidential candidate Mirlande Hyppolite Manigat, who had tirelessly cared for her husband even while
maintaining her high-profile role as an opposition leader, said she was devastated.

“I’ve suffered a huge loss,” she said in a brief interview from Port-au-Prince.

A former student of Manigat in Haiti, she became his second wife in 1970 after the two reconnected in Paris. She was

getting her doctoral degree in political sciences, and he was living in exile in France, doing research and teaching.

Over the years, the two would become Haiti’s leading political power couple, supporting each other as each unsuccessfully sought after his short presidency to return to the presidential palace under the banner of the party Leslie Manigat created, the Assembly of Progressive National Democrats (Rassemblement des Démocrates Nationaux Progressistes, or RDNP). — Read more here