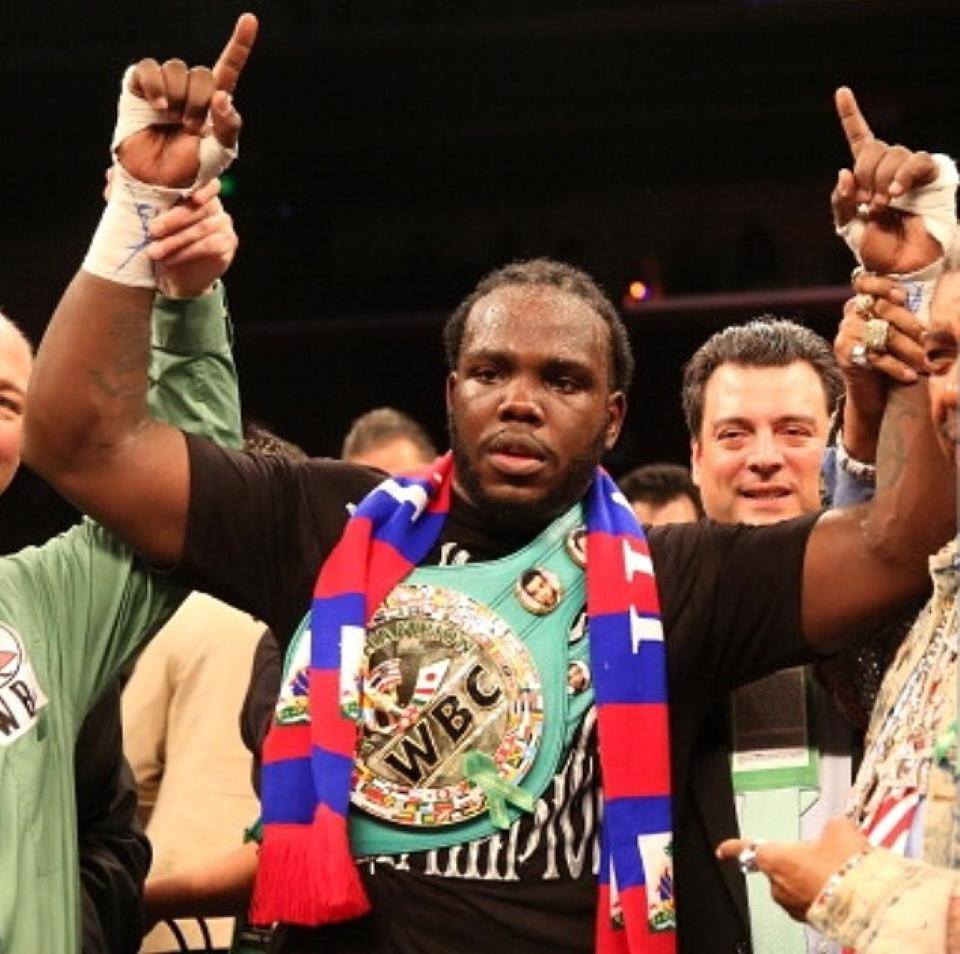 Congratulations Bermane Stiverne who just  became the first Haitian-born heavyweight champion ever, stopping Chris Arreola in the sixth round of an exciting rematch tonight in Los Angeles.

Stiverne who  lives in Las Vegas and trains at Floyd Mayweather Jr.’s gym told ESPN  on May 8th:

Bermane “B. WARE” Stiverne, born 1 November, 1978 in Plaine-du-Nord, Haiti is a Canadian professional heavyweight boxer of Haitian descent and the current WBC world heavyweight champion. Stiverne was Canadian superheavyweight silver medallist in 2005. In 2003 and 2004 he won bronze. In international competition he beat Robert Helenius (points) and David Price (KO).

His record was 49-10. He comments about his absence from the Olympics: “In a qualifying tournament in Mexico I met a Mexican fighter in the semi-finals and I was robbed. I knocked him down three times but still they gave him the decision and the place in Olympics.”He turned pro under Don King and knocked out his first 11 opponents with his trademark left hook. He is currently fighting out of Las Vegas.

In 2007 he lost by TKO to Demetrice King. In January 2011, he fought and KOd Kertson Manswell in the 2 round. He won the vacant WBC International, vacant WBC USNBC and vacant WBA Fedelatin heavyweight titles. He fought Ray Austin on June 25, 2011 for the vacant WBC Silver Heavyweight title. Stiverne won the fight by a 10 round TKO, becoming the mandatory challenger for the WBC heavyweight championship, then held by Vitali Klitschko.

After Klitschko vacated the title in December 2013, Stiverne was signed to fight Chris Arreola for the vacant title. On May 10, 2014, Stiverne won the title after a sixth-round knockout of Arreola, becoming the first boxer of Haitian descent to win a world heavyweight championship. –

Bermane Stiverne didn’t dominate like he did last year, but this time, he got the stoppage. Stiverne won the vacant WBC heavyweight title with a sixth round TKO of Chris Arreola tonight in their rematch, dropping the hometown brawler twice before referee Jack Reiss stopped the fight. Arreola (36-4, 31 KO) comes up short a second time in a world title fight, and at this point, it seems highly unlikely that he’s ever going to win a world title.

That said, Arreola has nothing to be ashamed of for this fight, as he got himself into proper shape, and was fighting well for the most part, though he had the same defensive lapses as usual. It turned out that the thunder of Stiverne (24-1-1, 21 KO) was just too much, as a sweeping right hand drilled Arreola on the temple and ruined his equilibrium.

With too long left in the round, Arreola was a sitting duck against the charging Stiverne, leading to the stoppage on a good call by Reiss, who gave Arreola every reasonable chance to get his legs back and stay in the fight.

“Arreola makes the same mistake with all his opponents,” he added, “but I’m guessing his opponents don’t watch the tapes. I knew it was a wrap, and the way I can throw my power shots for 12 rounds, I knew I could knock him out, because I’ve got the power.” – Continue Reading Here