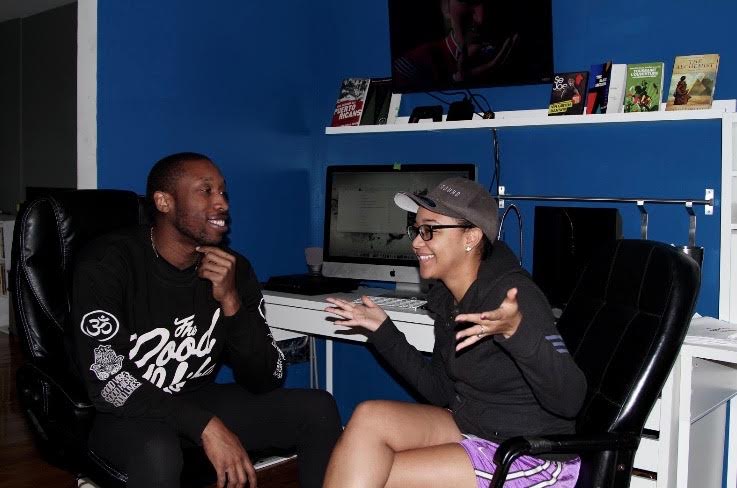 It’s Friday evening on the night of a new moon. It’s obviously Fall outside: the wind is quickly paced and leaves are changing colors. Under a dark sky, sprinkles of rain fall. I am making use of the time alone by making something to eat after returning home from work. Tonight, Joseph (you know him as Sejoe) and I are supposed to be talking about the Haitian Creole language. I’ve got Solange’s new album, A Seat at the Table, playing in the background.

We’ve decided to talk a little bit more about Word of the Day, a project we’ve been working on together under the Sejoe University umbrella. With this initiative, Sejoe wanted to create a universe composed of things that taught more about Haitian culture. We are currently conducting the third semester of the CRL1820 class in which the focus is the Haitian Creole language. By interviewing each other, we tried to figure out what our audience would be interested in knowing of the other. We ask each other questions we already know the answers to, letting it lead us into discovering new things about each other in the process.

Sejoe University maintains a clever humor, linking politics together with less serious topics and everyday happenings. In addition to WOTD, Sejoe University has Pwovèb Ayisyen PRV1791 (or Haitian Proverbs), in which he collaborates with an artist in displaying the time lapse of the proverb in a drawing.

These virtual classes sprouted from an invisible thirst that lives in Sejoe’s need to be around his people. Throughout the day, for example, he’s unconsciously trying to speak Creole as much as possible. If we enter an elevator or cab with a black person, he greets them in Creole. The response will inform him whether they are Haitian or not. When they discover they’re both Haitian, they hug and converse as if longtime friends. It’s an inspiring initiative. And in this way, I observe that he is always searching for his village, Sejoe University serving as a vessel to broadcast that.

Surviving on the Internet first has allowed Sejoe to manifest in the real world. Sejoe performs stand up comedy throughout the east coast, Canada and Caribbean islands. On November 5th, Sejoe will be hosting for former Haitian president, Michel Martelly, at Montréal’s Metropolis.

As we dwell in Creole Month for October, I am thinking more and more about language. Like many others, language has maintained an apparent space in my life because my parents are multilingual. My father, who is Haitian, speaks Creole, French, Spanish and English. My mother, who is Puerto Rican, speaks Spanish and English. Sejoe, who is Haitian, speaks Creole, French and English. I’ve been around the same collection of words since being in the womb, developing a foundation and forging me as the perfect student for Sejoe’s passion. He admitted that when we first met, in 2009 while in college, he blamed me for not being fluent. It’s a judgement from people I often have to confront.

“I knew you were raised in America during a time when being Haitian was almost forbidden. So I thought you was the type of Haitian who ran from their roots to avoid bullying,” he told me.

With time, he learned of my narrative and how far from the truth his first impression truly was. I am a product of my environment and, according to my parents, English was easier to speak at home because it was the common language between everyone. My sister and I, though, picked up audio as they congregated with their own families and were raised with an understanding. However, hearing the words come out of my mouth feels foreign for me, making me build fearful barriers that prevent me from learning faster. I do have an interest in being just as fluent as Sejoe and my parents. This desire has allowed me to serve as the link and testimony WOTD needed to grow.

“I feel like your voice is very welcoming,” he explains when I asked him why he didn’t do the video’s alone. “I have an accent when I speak English, too. I wanted a soothing voice that spoke with clarity.”

I watch him during the creative process as he develops the words, songs and punch lines for the semester. He is exhausted by the work but addicted to the fruits it brings when completed.

“I love Word of the Day the most out of everything I do because I get to connect more with my Haitian American fans,” he pauses, “who are like you. My Haitian friends from Haiti like the initiative. But since they are fluent, they feel like they aren’t learning anything.”

They, instead, watch WOTD to experience his ending punch line and to hear which song he used. The last seconds of the short video are always in Creole, making use of the word in the only way a Haitian would know how. The music is often of hip hop or African origin, with intentions to bridge the gap between the creative expressions of black people in the world.

“Black people are so creative and there is a song out there for anything. Hip hop helped me learn English when I first left Haiti. The first song I ever memorized was ‘Hit ‘Em Up’ by Tupac. I didn’t even know what I was saying!” Sejoe turned in his chair, put the volume on his computer up and Tupac’s voice over the classic beat blasted throughout our apartment. He rapped the lyrics, “This is the diss song of all diss songs! When I use this song, it has to be for a fighting word.”

He enjoys utilizing songs that will reference the word in hopes of increasing his students’ memory of how to use it. Often times, though, his fluent-speaking supporters surprise themselves when Sejoe teaches them something new.

“Haitians always feel like they know everything about Creole!” He laughs. “I’m still learning things, in doing all of this. I have learned how to use words better because I’ve had to research their different meanings.”

“How does that make you feel? To know it’s working?” I asked.

While smiling, he leaned back in his chair. “It feels good to be able to teach Haitians something new about themselves.”

But how much Creole can you actually learn from WOTD? The answer to this question lives in my testament. Before WOTD I could only remember two words: bonjou and bonswa, good morning and good evening. Today, mwen konprann much more: I can communicate whether I’m hungry or upset, happy or in need of you to shut up. I can say please, thank you and whether you’re acting like a monkey or smelling a little funny. If spoken to slowly, I can understand full dialogues without needing to separate words in order to translate one by one. When Joseph and I spent three weeks in Haiti, I felt my brain rewiring, encouraging my mouth to ditch the English and come home. The movement happened slowly but is inevitable with exposure.

For example, Joseph and I were at a Haitian restaurant in Brooklyn for brunch one Sunday. The waitress and staff, excited to interact with Sejoe, spoke Creole to us from the moment we stepped in. I was able to navigate throughout the conversation much better than ever before. I still felt scared to talk but I could understand what she was saying and was able to nod at the right moments. Laugh at the right moments. Reply ‘yes’ or ‘no’ to her in the right moments. My fluid and short replies saved me from judgement.

He noticed the distinction and told me it is time I start saying the words I recognize out loud. “With Word of the Day, you should have 150 words in your vocabulary.”

I slapped my forehead, embarrassed in my lack of progression. “And those 150 words will multiply because language is like a regenerating alien!”

Sejoe is positive his culture and country maintains qualities that need to be shared, communication being the most powerful. In this respect, he expects his students to be active in class by tagging friends, sharing the posts and participating in dialogue with others in the comment section. To show gratitude for his most active attendees, he conducts a graduation ceremony in which he grades his top students.

Having learned English in three months after moving to South Florida from Haiti as a teenager, Sejoe is the perfect professor to instigate linguistic ventures. Don’t get it twisted, though: Sejoe University is not strictly for Haitians. The hope is to get Haitian Creole into more households while encouraging Haitians who do not speak the language to be more comfortable in its use. That is the trick, he says, comfortability.